Ways to Take Screenshots on Windows 10 and Windows 11

It’s common to want to take a screenshot on a PC. If you’re not using a third-party tool, you can do it manually. The most obvious way is to Hit the Prt Sc button/or Print Scrn button (print screen key), which will grab the entire PC screen. You do this when using Windows OS and press the Print Screen key (located in the top right of the keyboard) to take a full PC screenshot and copy the screen’s image to the clipboard or save it in the screenshots folder.

But there are more screen capture methods of taking screenshots on Windows. 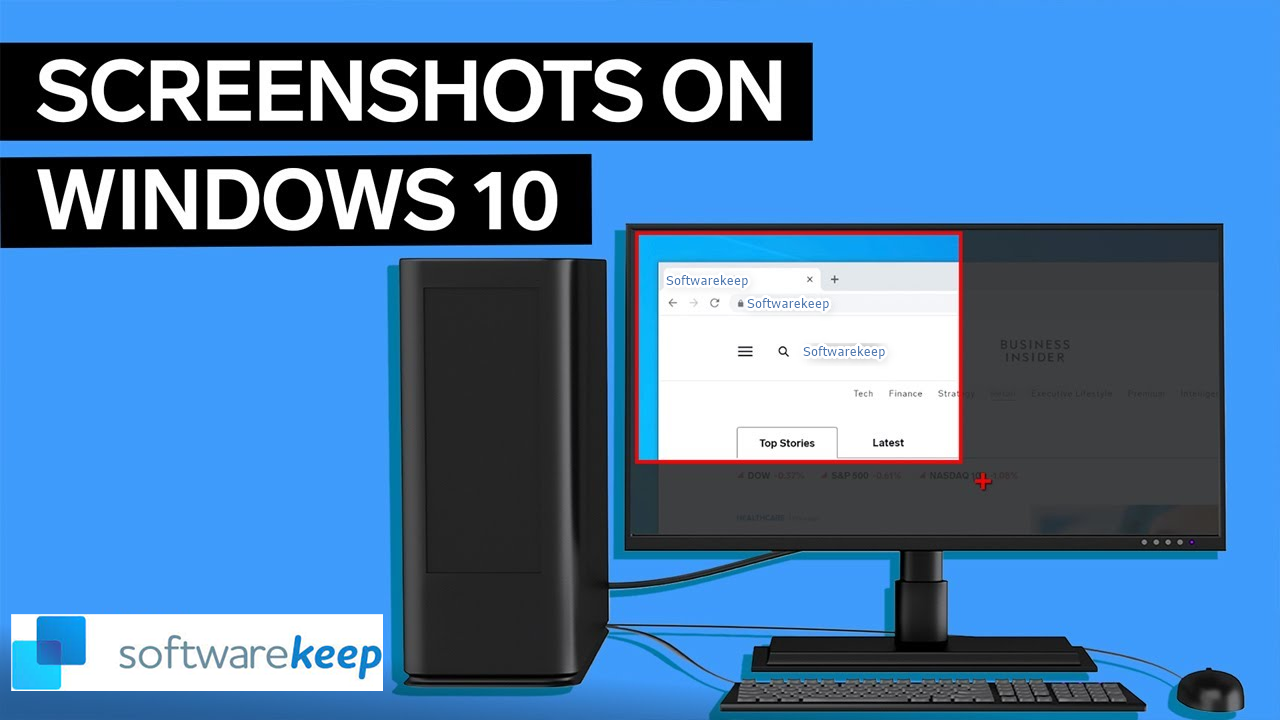 This article will cover how to screenshot Windows 10 and all the steps you need to carry out. We’ll also answer some critical questions that most users ask:

In the FAQ, we also show you how to take a screenshot on Windows 11.

Windows 10 has many ways to achieve this, be it taking a screenshot of the entire screen, a particular window, or a part of the screen. Let’s take a look at them one by one.

How to screenshot on Windows 10: easy tricks

The following methods show you how to screenshot on windows to capture full or minimized screenshots:

Method 1. Use the Print Screen key/shortcut

The easiest way to take a PC/computer screenshot on Windows 10 is the Print Screen key (Prtscn). This button is usually located at the top row of the keyboard, near the Function (F#) keys. To capture your entire screen and automatically save the screenshot, tap the Windows key + Print Screen key. Your screen will briefly go dim to indicate that you’ve just taken a screenshot, and the screenshot will be saved to the Pictures > Screenshots folder. Let’s look at this in detail below:

To capture your entire screenshot on Windows, simply:

On some keyboards, you might need to press the Function (Fn) key and the Print Screen button to trigger the screen capture, i.e., Fn + PrtScn button/or Print Scrn (print screen)

The print screen key will capture the entire screen and save it on the clipboard. Check the notifications on the lower right corner of your screen to see the saved screenshots.

Note: if you have more than one display, it will be captured into a single image.

By default, this method does not save the image as a file; rather, it copies it to the Clipboard. After doing so, you can paste it (By pressing Ctrl+V or Right-Click > Paste) onto a document (Like a Word or Google document) or an image processor (Like Microsoft Paint, or even Photoshop).

If you want to save the image as a file, you can also do it with a keyboard shortcut.

Method 4. Use the Snipping Tool to take a screenshot

The snipping tool is the best way to screenshot on Windows if you want to customize, annotate, or share your screen captures. The Snipping Tool app is an excellent tool for taking screenshots. It has been around since Windows Vista. You can use it to;

However, note that taking screenshots using a snipping tool does not automatically save the screenshot as an image file, but it has the option to do so.

Here’re the steps to use the snip and snipping tool to take a PC screenshot: 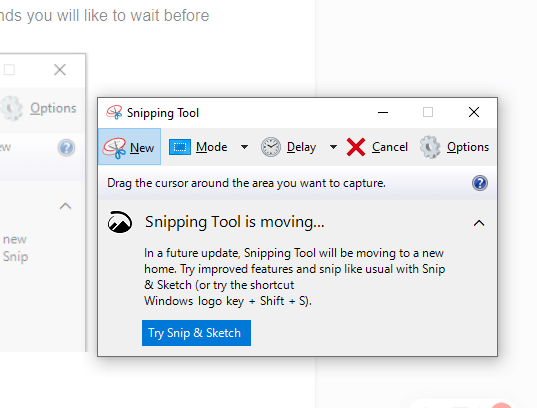 Once you have taken the screenshot, you have many options to

Method 5. Using the Snip & Sketch app to take a screenshot.

Summary: With the snip sketch tool, take a snapshot to copy words or images from all or parts of your PC screen or take screenshots on the windows operating system. Open screen Snipping Tool to make changes or notes, then save, and share. You can capture any of the following types of snips using the snip sketch tool:

Draw a free-form shape around an object.

Drag the cursor around an object to form a rectangle.

Select a window, such as a dialog box, that you want to capture.

Also, it’s important to know that when you capture a snip, it’s automatically copied to the Snipping Tool window where you make changes, save, and share.

Note: The easiest way to call up Snip & Sketch is with the keyboard shortcut Windows key + Shift + S. You can also find the Snip & Sketch tool listed in the alphabetical list of apps accessed from the Start button as well as in the notification panel on the lower right corner where it listed as Screen (full) snip. Or you can just search for it if you don’t commit the keyboard shortcut to memory. (If you’re a regular screenshot taker, we recommend pinning the app to the taskbar.)

Method 6. Using the Game Bar to take a screenshot.

The last method we are going to review involves the use of the Game Bar for screen capture. The game bar in Windows 10 allows you to record gameplay footage, record videos, and take screenshots, plus a number of other ones that we will not discuss in this article. You can take screenshots with the game bar even if you are not in a game. Let’s find out how to use it:

The game bar can help you record the screen in Windows 10.

The Game Bar is automatically installed in Windows 10. (If you can’t find it for some reason, you can download it here.) However, if you haven’t used it yet, it might be worth checking to make sure it’s working — especially before you try to record videos. To do this

Note: The page you’ve opened also has keyboard shortcuts for Game Bar commands such as opening the Game Bar, taking a screenshot, and starting and stopping a PC screen recording. You can ALSO come up with your own shortcuts for these commands and enter them here if you wish.

Now, with the game bar enabled, you can begin your screen recording and record game clips of your favorite game.

How to Record your Screen with the Game Bar

Keep in mind that you can only use the Game Bar to perform a screen record of only one application or active window at a time, which is usually the last window you clicked into. Also, you can’t switch to recording another window after you start recording. The game bar won’t also let you record your whole screen, so you can’t record your Desktop or File Explorer or a few other apps, such as Maps. We recommend that you first experiment ahead of time if possible.

Here are the steps to undertake the screen record and record game clips with the game bar (using x box Game Bar):

Read here if you need further information about How to record your Windows PC screen using Xbox Game Bar.

Method 7: Use third party app to capture screenshots on PC

If the Windows provided methods can’t help you capture the screenshots well, you can resort to third party apps. Third party integrations are an integral feature for screenshot tools in Windows. They add further functionality to your screen capture such as capturing scrolling screen as well as easy sharing between various work productivity apps. The print screen software from third parties includes various integrations with image editing [image editor], project management, file sharing, and messaging tools to maximize tool efficiency and worker productivity.

Some of the third party screen capture tools include:

In this article, we detail how to use third party apps to capture scrolling screens.

ow to screen shot on

Read: How to Get Started With Windows 10 including taking screenshots on Windows 10

How to screen shot on Windows 11 Guide

There’s more than one way to take a screengrab in Windows 11. Here are four different ways to show you how to screen shot on Windows 11.

Method 1. Take a screenshot of the entire screen with the Prt Sc key

Method 2. Use Windows key + PrtSc key to take a full screen screenshot and save it to your computer

Method 3. Use the Snip & Sketch Tool to take a screenshot of only part of the screen

Perhaps you want to take only a section or an active window of the PC’s screenshot. In this case, Windows 11 gives you the option to take only a partial screenshot using the snip and sketch  tool:

Method 4. Use the Snipping Tool to take delayed screenshots

The Snipping Tool comes built into Windows 11 just like it was IN Windows Vista, Windows 7, Windows 8, and Windows 10. It is the same tool used in the Snip and Sketch tool, except with a few tiny additions. To use it,

And that does it! You now have 5 methods at your disposal showing you how to screenshot on Windows 10. Do you have a Mac and want to take a mac screenshot? Check out our article on how to take screenshot on Mac.

If you want to find out more tricks on how to use your Windows at its maximum capacity, join our newsletter today! You even get a 10% discount code on our store! 🙂 Would you like to receive promotions, deals, and discounts to get our products for the best price? Don’t forget to subscribe to our newsletter by entering your email address below! Receive the latest technology news in your inbox and be the first to read our tips to become more productive.