This placement is being promoted by an IGN partner. The partner had no input in the creation or production of the content itself

Last month, HP launched its first and currently the country’s only 16-inch Gaming laptop. The Pavilion Gaming 16 comes with a sophisticated design and upgraded specs to keep up with modern games. The Pavilion series is one of HP’s most successful and popular product lineups. HP launched its first ever Pavilion desktop back in 1995, which was the company’s second PC designed for the home market. Dubbed HP Pavilion 5030, it came with 75 MHz Intel Pentium processor, 8MB RAM, and an 850MB hard drive. Since then, the Pavilion lineup has become one of HP’s longest running series of laptops.

HP debuted the Pavilion Gaming lineup in 2018 with a 15.6-inch laptop along with a variety of configurations. The 2018 edition of Pavilion Gaming laptop had an 8th Gen Intel Core i7 processor coupled with up to Nvidia GeForce GTX 1050 Ti GPU. The laptop supported up to 1TB HDD and 128GB SSD and had 16GB DDR4 RAM. Its 15.6-inch FHD display came with an optional 144Hz panel. The high refresh rate display proved to be increasingly helpful in make or break moments in intense first person shooters. HP also offered a 4K panel, which provided an immersive experience in games with cinematic visuals and while watching 4K content.

The Pavilion Gaming laptop was HP’s entry into the affordable gaming laptop market, which was designed for players who want to experience AAA games at a budget without compromising on the specs. The 1TB HDD + 128GB SSD storage was considered generous compared to competitors at the same price point. The machine packed a three cell 52.5Wh battery that allowed intense gaming sessions even while travelling. Imagine finishing an entire single-player campaign during a long flight.

The HP Pavilion Gaming 15 2019 had a cooling system similar to its predecessor. HP realized that the large vents on the front do a great job of dissipating heat and the dedicated fans as well as the heat pipes keep the CPU and GPU cool even while playing demanding games. The hardware is capable of running most of the latest games out there without any hiccups. The machine packs a three cell 52.5Wh battery, same as the previous generation, to offer long gaming sessions without worrying too much about battery life. With its competitive pricing, the HP Pavilion Gaming 15 stands out as a great affordable gaming laptop. 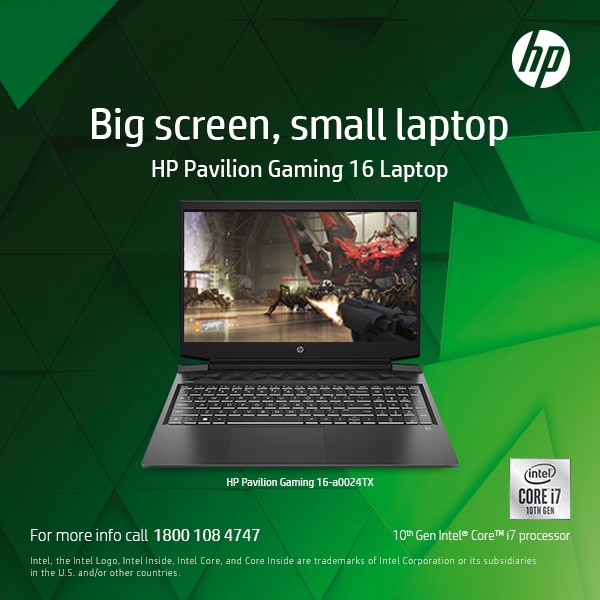 The Pavilion Gaming 16 series are HP’s latest gaming laptops. Instead of launching two different models like last year, the new gaming laptops seem to have found the sweet spot between 15-inch and 17-inch displays. Using slim bezels, HP has managed to put a 16.1-inch screen in a 15-inch chassis. The design has changed a little this year. The hinge at the centre of the display is now wider compared to previous models.

The HP Pavilion Gaming 16 lineup is powered by 10th Gen Intel Core i7 processors alongside up to Nvidia GTX 1660Ti. It supports 256 GB M.2 PCIe SSD and 1TB HDD, coupled with up to 16GB DDR4 RAM. The display options include an FHD 60Hz IPS panel. The gaming laptop comes with a three cell 52.5Wh battery. The machine also supports fast charging that can get you 50% juice in just 45 minutes.

In terms of I/O, the HP Pavilion Gaming 16 lineup comes with an HDMI 2.0 port, two USB Type-A ports, one USB Type-C port, an Ethernet port, a headphone jack, and an SD card slot. The machine is equipped with Intel Wi-Fi 6 support to ensure lag-free gaming experience. The gaming laptop comes with high-quality dual speakers and audio by Bang & Olufsen.

The Omen Command Center comes with an integrated Network Booster that shows the total bandwidth usage for all games and apps. It lets you prioritize as well as block network access for various games and apps. The Omen Command Centre also comes with Dual Force functionality, which enables you to send gaming traffic to the hardwired connection and media traffic to WiFi. Along with these, the Game Time feature accurately tracks time spent on every game.

Every year HP launches some of the top gaming hardware with the Pavilion Gaming lineup. The specs and performance of these gaming laptops get a massive upgrade each year to keep up with the current-gen and next-gen games. With its state of the art design, the Pavilion Gaming series manages to stand out and stay recognizable among other machines.

The specs of Pavilion Gaming 16 are also great for other tasks, including content creation and work-related needs. The keyboard offers an amazing typing experience and the 52Wh battery allows users to work while traveling without worrying about the battery life. The Pavilion Gaming 16 truly becomes a great work-and-play laptop.

With the Pavilion Gaming lineup, HP offers some of the best gaming laptops in the market at an affordable price point. The high refresh rate FHD displays are ideal for media playback as well as intense gaming sessions. Even at a competitive price, the company delivers premium hardware and advanced software support with the Pavilion Gaming series. The sleek design aesthetics and fantastic build quality is suitable for casual as well as pro gamers. HP’s latest gaming laptop, Pavilion Gaming 16 is available on the